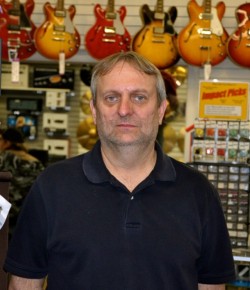 You could say that Pete Wagener was literally raised in a guitar store. His father started the business when Pete was in grade school, which was over 40 years ago, and Pete worked in the store from the age of 12. In fact, it’s the only job he’s ever had and has been the owner of the store for over 20 years and going strong.

His passion has always been archtops and began collecting them when he was 13. His collection grew to well over 400 guitars and mandolins at one point and included every model of every archtop ever made by Gibson- and in every color.

His collection and store inventory has also included archtops from Epiphone, D’Angelico, D’Aquisto, Stromberg and the list goes on. Pete is respected as an authority on all things archtop related.